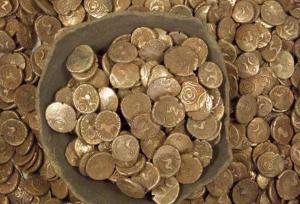 The 824 so-called staters were discovered through a metal detector in a broken pottery jar buried in a field near Wickham Market, Suffolk.

According to Jude Plouviez, of the Suffolk County Council Archaeological Service the coins dated from 40BC to AD15.

They are thought to be belonging to the predecessors of the Iceni Queen Boudicca.

Their value when in circulation had been estimated at a modern equivalent of between 500,000 pounds and 1m pounds, but they were likely to be worth less now.

"The discovery is important because it highlights the probable political, economic and religious importance of an area.

"It certainly suggests there was a significant settlement nearby. As far as we understand, it was occupied by wealthy tribes or subtribes," she added.

The staters, which each weigh about 5g, will now be valued ahead of a treasure trove inquest.

"We don't know how much they will be worth but it will be less than they were at the time," said Plouviez.

"After the treasure trove inquest, they will be offered to museums at their current value," she added. (ANI)