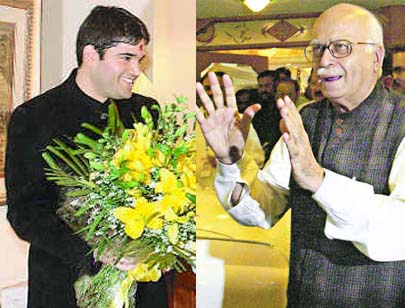 During their meeting, Advani reportedly told Varun to respect the undertaking he had put before the Supreme Court.

According to sources, Varun thanked Advani for his support while he was under arrest and in Etah jail.

Sources also say Advani had asked Varun to be cautious. Varun in turn assured Advani that he would be more careful with his campaign speeches.

During the meeting, Advani also inquired about Gandhi''s campaign plans. The BJP leader also enquired in detail about Varun''s experience in Etah jail.

Varun, 29, was released from the Etah jail in Uttar Pradesh on Thursday after he gave a fresh undertaking to jail authorities that he will not make inflammatory speeches.

The BJP nominee from Pilibhit constituency pleaded for bail saying he had to file his nomination on April 21 to enable him to contest the Lok Sabha elections. (ANI)