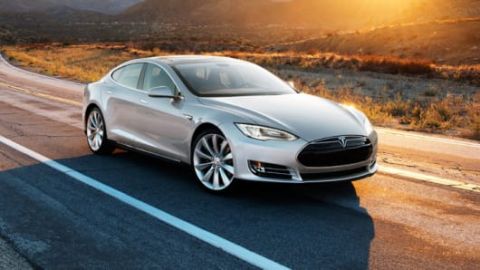 Tesla has upgraded Model S range to 402 miles on a single charge. The range improvement has been achieved by improving efficiency, adding small improvements and new wheels. EPA has given new ratings to Tesla’ Model S version “Long Range Plus”. Over the last year, Tesla engineers have been working on small improvements for Model S and finally, the changes have been announced by Tesla Motors.

In the recent weeks, Tesla Motors stock has become a favorite among investors. The company currently ranks as the most valuable automobile company with valuation touched $200 billion. Tesla stock crossed $1,000 mark in the recent trading sessions. Elon Musk has played a major role in bringing Tesla as a reliable automobile company for consumers caring about environment, style and powerful vehicles.

In an official statement, Tesla Motors informed, “This significant achievement reflects Tesla’s obsession with efficiency and energy frugality, and is realized through several changes, both iterative and transformational, in core hardware and system architecture development by the Tesla engineering, design, and production teams. These changes went into production earlier this year when we first started manufacturing Model S Long Range Plus at our factory in Fremont, California. All Model S Long Range Plus vehicles will receive the new 402-mile rating.”

Tesla recently announced some small improvements to its electric truck as well. Investors are waiting for Tesla’s next move and we could see the stock trading even stronger once the company announces its production numbers.