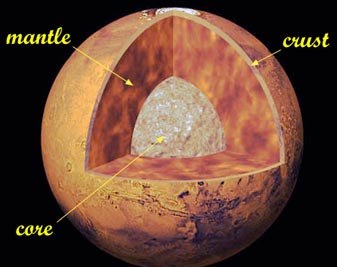 Washington, Feb 21: Scientists from the United States and the Netherlands have conducted experiments that replicate formations on Mars, indicating incidents of rapid release of water from the planet’s interior.

Mars has many basins that contain formations that look like fans. A few of these fans, only about 10, have steps down into the basin. Since scientists first reported this feature three years ago, there has been no clear consensus on how they formed.

But now, geosciences faculty members at Utrecht University in the Netherlands have reproduced the process.

“There are no fans with steps on earth, so we had to build one,” said Erin R. Kraal, now a geosciences research scientist at Virginia Tech.

In a room-sized sediment flume (16 by 40 feet), the researchers dug a crater in sand, then simulated water flow into the crater. “As the fan and the water level intersected, the steps appeared,” said Kraal. “As the water flows in through a channel, it erodes the sediment. The water fans out and deposits the transported sediment as deltas, building steps down into the basin,” he added.

Once they established what had to happen to make a stepped fan in the lab, the scientists created sediment transport models and studied the morphology of the fans on Mars using satellite images and topographical date from the Mars Orbiter Laser Altimeter
(MOLA).

Based on fans of 20 kilometers in basins of 100 kilometers, they calculated the conditions for the creation of a stepped fan.

According to the researchers, formation of stepped fans would only take 10s of years – not the hundreds to millions of years estimated for other Mars hydrologic events. But it would require a lot of water and it would be a one-time event. In fact, the basin would not refill.

“Water volumes would be between that of the Mississippi River over the course of 10 years or the Rhine River flowing for 100 years into a 62-mile wide basin,” said Kraal.

But, looking at an image from Mars, the water channel looks nothing like the Mississippi River – being hundreds of times smaller than such a river.

“We suggest the water was released internally, such as hydrothermal water suddenly pushed to the surface,” said Kraal. (ANI)