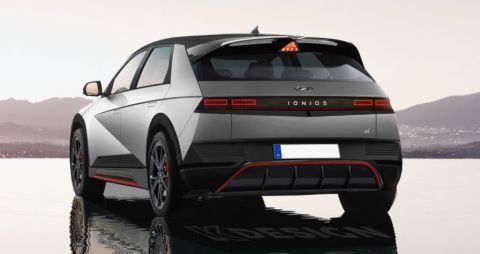 The 2024 Hyundai Ioniq 6, a recently unveiled retro futuristic electric car, is reportedly on the way to spawn two new variants as the South Korean automaker has plans to expand the lineup. The indication about new variants of Hyundai Ioniq 6 EV came from the brand’s chief designer SangYup Lee, who said that he could make a great hatchback out of the newly unveiled retro futuristic electric car.

When asked whether the company’s design team had considered a hatch-style liftback for the Ioniq 6, Lee offered a rather surprising answer. He said, “I can make a great hatchback out of that; a shooting brake."

The design chief’s statement is a strong indication that a more practical and perhaps more visually appealing all-electric model could be in the pipeline. When we look at the images of the Ioniq 6 sedan shared by the Korean manufacturer, we see its flowing lines and curved surfaces that practically beg for a shooting brake treatment.

Many auto experts are of the view that renderings of the Ioniq 6 shooting brake variants could surface online sooner than later, which would help us in getting a better idea of what such a model would look like. After all, the Korean automobile giant is already offering a shooting brake model – the Genesis G70 Shooting Brake, which was launched in Europe last year.

Lee also pointed to the possibility of launching an Ioniq 6 N variant. The N-badged variant of the new all-electric sedan would reportedly make a great performance model. The Hyundai Ioniq 6 N would clearly make more sense as it would be a smaller, lower EV. The existing Ioniq 5 EV will also get an N-badged performance variant sometime next year. However, details about the N-badged EV’s powertrain have not been revealed yet.

Still, the N-badged model will likely have a similar dual-motor setup as the Kia EV6 GT, which is based on the same E-GMP platform that has been used for the Ioniq 5 EV. More specifically, the EV6 GT comes equipped with a 77.4-kWh battery and two electric motors that produce a combined 577 hp (roughly 430 kilowatts) and 546 pound-feet (roughly 750 Newton-meters) of torque.

It is easy to assume that the aforementioned Hyundai Ioniq 6 N model would also use the same powertrain that enables the EV6 GT crossover to accelerate from 0 to 62 mph (0-100 km/h) in just 3.5 seconds and achieve a top speed of 162 mph (260 km/h).