Being overweight may independently raise risk of heart disease 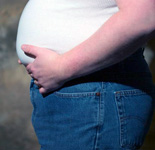 Washington, Sept 11 : A review of 21 studies has found that being overweight appears to increase the risk for developing coronary heart disease events independent of traditional cardiovascular risk factors.

Boffins led by Rik P. Bogers, Ph.D., of the Centre for Prevention and Health Services Research, National Institute for Public Health and the Environment, Bilthoven, the Netherlands, conducted the review.

The combined data from the 21 previous studies of overweight and heart disease that included a total of 302,296 participants, showed that moderately overweight individuals had a 32 percent increased risk of heart disease compared those who were not overweight. Obesity increased their risk 81 percent over those of normal weight.

The researchers then factored in age, sex, physical activity levels and smoking.

They then adjusted the figures further for blood pressure and cholesterol levels.

This reduced the excess risk associated with being moderately overweight by 47 percent, to 17 percent, and with obesity by 40 percent, to 49 percent.

For every five units an individual's body mass index increased, the risk for heart disease increased 29 percent before adjusting for blood pressure and cholesterol and 16 percent after adjustment.

"This implies that, even under the theoretical scenario that optimal treatment would be available against hypertension and hypercholesterolemia in overweight persons, they would still have an elevated risk of coronary heart disease."

"Because of the high prevalence of overweight and the expected future increases, it is essential to gain precise insight into the consequences of overweight for health and into the metabolic pathways that link the two."

They propose several other mechanisms by which being overweight could increase the risk of heart disease, including constant low-grade inflammation, problems with blood vessel function or an imbalance in blood chemicals that could lead to more clotting.

The study is published in the September 10 issue of Archives of Internal Medicine, one of the JAMA/Archives journals.(With Inputs from ANI)