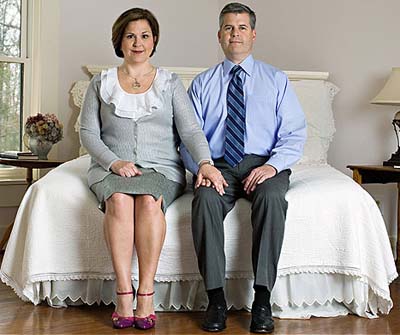 London, Apr 29: An American woman has revealed how she pledged a year of sex to her husband as a gift for his 40th birthday, and how it changed their lives.

Charla Muller, 42, from North Carolina, USA, even went on to write a book about the experience she had with her hubby salesman Brad, who is now 42.

The mother of two started out by telling how her husband literally fell over when he heard the offer, and how he even refused it.

"It''s a great idea, I just don''t think you really mean it," the Sun quoted Brad as having told his wife.

But after a week, he finally agreed, and for the first month he loved it, even when his wife was not looking her best.

"Sometimes I don''t shave my legs and have stinky breath, but Brad still finds me sexy," Charla revealed.

The experience kept both of them happy and beaming, and they were getting along better as a couple, but Charla worried that their every day sex might become as just another routine chore.

On the third month, Brad had to call it a day during one session.

"I don''t think I have it in me. After all, there''s always tomorrow," he stated.

Brad would have been appalled or embarrassed by the idea that he couldn''t deliver, but knowing he could have sex every day, no matter what the circumstances, meant the pressure was taken off constantly performing.

After six months of the gift, both worried whether it was possible to keep things new and exciting, and at seven months they came to halt.

The two decided to increase the intimacy levels, and they started talking more, hugging more, kissing more and connecting more.

But on the 305th day Brad refused flat out to have sex with his wife, though she was later able to cajole him into in.

Charla was ecstatic that she had been able to fulfil her commitment when she reached the last day, and she realised that the gift had brought something back to their marriage - intimacy.

She also realised that sex was not such an important part of a marriage, and that it holds equal value with communication, spending time together, and just having plain fun. (ANI)