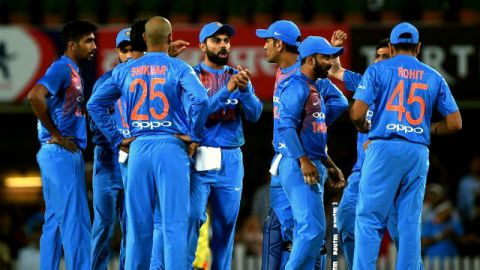 With only one year remaining before the start of the T20 World Cup 2020 in Australia, Virat Kohli has come out to express the importance of the event and how his team is preparing for the tournament.

Australia will be the host of the event scheduled to start from 18th October to 15th November 2020. The final match is expected to be played at the Melbourne Cricket Ground (MCG).

While marking one year to the tournament, India’s captain together with other captains expressed their views regarding the much-awaited event.

During the 2016 tournament edition, India was beaten by West Indies in the semi-final played in Mumbai. They, however, won the inaugural World T20 in South Africa under the leadership of Mahendra Singh Dhoni.

Virat Kohli said that their main focus is now on the T20 World Cup 2020 and they are doing everything they can to place themselves in a better position to compete for the ICC trophy against other teams. According to the India captain, once the players are selected for T20I matches, they will be motivated to put their feet forward for the T20 World Cup. Their aim is to head to Australia with a settled team combination.

Virat has received praise from every corner after leading his team to a record 11th successive Test series win at home. One of the notable figures to congratulate him is Shoaib Akhtar, an ex-Pakistan fast bowler who has hailed Kohli for his achievement saying he is the best captain in the world.

Among his recent achievements is when his team clinched the Three-Test series with an undisputed 2-0 winning against South Africa by an innings and 137 runs. This marked their 11th straight winnings at home.

Akhtar was on record saying that Virat Kohli will become a better captain after the World Cup since he learns from his mistakes. It seems he was right since Virat has learned to select the team’s batting order and the composition.

He added that the world lacks great captains apart from Virat Kohli and Kane Williamson.

Many terms Kohli the most successful Test captain having won 30 out of the 50 matches.

Now that the Indian team will be participating at the ICC T2O World T20 World Cup in Australia, many are now looking at the way the Kohli-led team will perform during the tournament. Remember this is a great opportunity for betting lovers, with many of them looking for reliable betting sites in India such as ComeOn betting to try their luck.

While it is true that the Indian team has a great pool of players to choose from, don’t forget that other teams have great players too.

The last time India participated in a T20 series was in 2018, with the series-tying at 1-1 as the second T20 got abandoned as a result of rain.

It is interesting to note that this is the first time that the Indian team will be taking part in the T20 World Cup under Virat Kohli captaincy. So his captaincy will play a major role in their performance.

Sourav Ganguly, a former Indian captain who is set to be sworn in as BCCI president has sent a message to the Indian team.

Ganguly praised the India cricket team but challenged them to win the ICC tournaments.

Remember India lost to New Zealand during the ICC World Cup 2019 semi-final in England. Earlier, during the ICC Champions Trophy in 2017, they lost to Pakistan. Not forgetting their loss to West Indies during the World T20 2016.

According to Ganguly, the performance of the Kohli-led team is satisfactory at the moment. His only concern is that they need to emerge winners in big tournaments.

Speaking on 15th October after he was facilitated by the Cricket Association of Bengal (CAB) in Kolkata for the BCCI president post nomination, Ganguly said that he does not expect the Indian team to win every time because it is impossible.

Having that the Indian team had participated in seven big tournaments without a single win, he urged the team to prepare themselves mentally for T20 World Cup 2020.