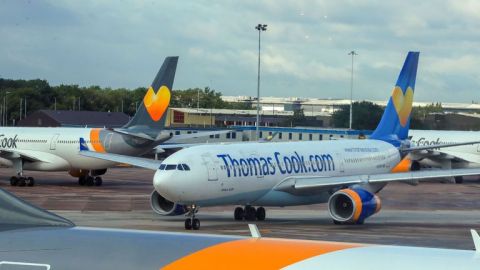 British travel major Thomas Cook has ceased trading with immediate effect after the last-minute negotiations to save the company failed. The company was asking for £250 million in bailout funds which have been declined. The company employed 22,000 workers worldwide and 9,000 of them in the United Kingdom.

The failure of 178-year-old holiday has left many holidaymakers in trouble. Many people will have to cancel their vacations and they could be cut-short for many of them already abroad. The company informed that chartered flights have been arranged to bring back some of the holidaymakers from Europe, Asia, Caribbean and North Africa.

The immediate news has come as a shock for many people who had booked their vacations with Thomas Cook. The company had 600,000 customers and nearly 150,000 people will be directly impacted by the failure of travel firm.

Transport Secretary Grant Shapps said, "I fear it would have kept them afloat for a very short period of time and then we would have been back in the position of needing to repatriate people in any case."

The notice on website of Thomas Cook informed….
Thomas Cook UK Plc and associated UK entities have entered Compulsory Liquidation and are now under the control of the Official Receiver.

The UK business has ceased trading with immediate effect and all future flights and holidays are cancelled.

A dedicated support service is being provided by The Civil Aviation Authority to assist customers currently overseas and those in the UK with future bookings.