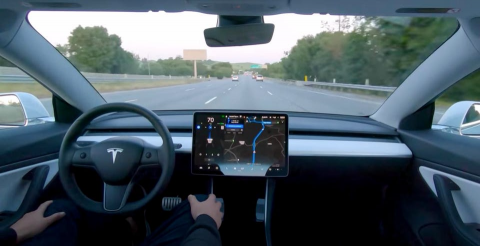 Electric car pioneer Tesla Motors is all set to release Full Self-Driving (FSD) beta to thousands of more Tesla car owners in the coming months, but those people will need a high safety score to be able to reap the benefits of the innovative software. Tesla CEO Elon Musk recently explained how owners of Tesla cars can get FSD beta software. Using his usual social-networking platform Twitter, the billionaire entrepreneur declared that it would not be as simple as pressing the new button on the screen to get FSD beta. One will have to receive a high score from the company’s new Safety Score system.

The EV giant recently announced the launch of Safety Score system to analyze driving habits. The new score system gives owners a safety score. However, it is still under the development stage. In the initial phase, the earliest electric car owners who need a perfect score of 100 to get FSD beta. Later, anyone interested in the feature would need to get a score of 99, 98, and so on to reap the benefits of the self-driving software.

It is really difficult to get a perfect score of 100. Not only that, as the new safety system is still under developed, it is not perfect in scoring drivers.

The DragTimes YouTube channel’s Brooks Weisblat posted a video, explaining how the Safety Score System was scoring him. The Safety Score system allows the driver to drive too fast, ignore red lights, and make turns without making turn signals. However, it reduces points for braking too hard, turning too fast and following other vehicles too close.

FSD beta 10.1 has already been released by Tesla, and CEO Musk’s recent tweet revealed that the company will make version 10.2 available in around a week from now. Once released, the new version of the software will be offered to as many as 1,000 EV owners per day, but priority will be given to the safety rating.

For the time being, FSD beta is the most advanced driver assistance system that is available on production vehicles. It comes with the promise to eventually offer self-driving, but it is hard to say by when. Thus far, it requires full driver attention as it is still in development.