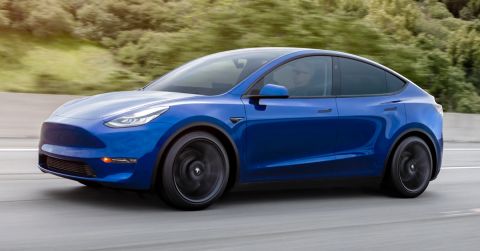 After seeing strong demand for the Tesla Model Y in the first quarter of 2022 around the world, many analysts strongly agree that Elon Musk’s statement about the all-electric compact crossover being a global best-seller in 2023 is quite feasible.

Sales data from the latest quarter confirmed that Tesla continues to experience strong demand around the globe. The EV giant, in fact, delivered more than 310,000 units in the January through March quarter, setting a new record. The figure represents a year-over-year growth of 68 per cent. Compared to the first quarter of 2021, the Q1 2022 sales represent a growth of 250 per cent.

In October last year, at the EV giant’s annual shareholder meeting, Tesla Board Chair Robyn Denholm announced that the company aimed to sell 20 million EVs per year by 2030. As the company sold slightly more than 930,000 EV around the globe in 2021, the statement by Denholm wasn’t taken seriously by many analysts. However, many analysts agree that CEO Musk’s statement about the Model Y being a global best-seller in 2023 is realistic.

With a projection of more than 1.6 million sales this year, there is a great possibility that Tesla will surpass Audi in the global market by the end of 2022.

There are a number of reasons to support Tesla’s optimism. The Model Y compact crossover SUV, the latest offering from the world-renowned EV brand, continues to post strong results. During the first quarter of this year, this EV performed very well in model sales ranking in several countries of the world. For example, the Model Y emerged as the top seller in Norway, and the second-best-seller in Austria. In the fast-growing EV markets of Denmark and Sweden, it grabbed the no. five spot in the list of best-sellers.

The Model Y also posted very good results in larger markets like the United Kingdom and United states, where it emerged as the sixth and fourteenth most-popular electric new car, respectively. When we focus on only the month of March 2022, the EV led model rankings in Austria, Norway, Denmark, Luxemburg, and the United Kingdom. In Finland, Switzerland, and Sweden, it emerged among the top 10 models.

The Tesla Model Y entered production at the company’s Fremont, Calif.-based plant in January 2020, and deliveries commenced in March of that year. Within a couple of years, the EV is already among the best-selling cars in the world, and the popularity of the car is widely expected to continue for the numerous years to come.