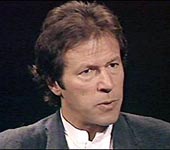 "Sufi Mohammad is not just violating the Swat accord; he is going against the Holy Quran by breaking promises," Khan, the chief of the Pakistan Tehrik-i-Insaaf, said.

He condemned the TNSM chief for terming the country's Constitution and judicial system as `un-Islamic'.

Khan said his party believed in the Constitution of the country and wanted its supremacy at any cost.

He also blamed former President General Pervez Musharraf for the chaos in Balochistan, and said if Musharraf had agreed to the demands of the Baloch people earlier, the region would not have been facing the turbulent situation that is being witnessed there currently.

"Pakistan's enemies, who benefited from wrong policies of the Musharraf regime, started a campaign to portray Pakistan as a failed state and hatched conspiracies for launching a separatist movement in Balochistan," the Dawn quoted Khan, as saying.

"Husain did not say anything about the inhuman treatment meted out to Dr Aafia Siddiqui by the US officials, but made an issue out of a `fake video of the flogging of a girl in Swat," he said, adding, "Husain is the `biggest terrorist' who had never been imprisoned because he was subservient to the US and the UK." (ANI)