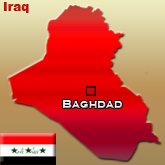 Baghdad - A senior Iraqi Interior Ministry official was wounded when a car bomb struck his convoy as it passed through central Baghdad on Sunday, police said.

The general, who is in charge of the Interior Ministry's traffic department, was wounded in the attack, which police called an assassination attempt, but was expected to survive.

In a separate incident on Saturday, gunmen killed an off-duty police officer in the northern Iraqi of Mosul, police told Baghdad's Voices of Iraq news agency. Three civilians were also injured in that attack, police said.

The assassinations come amid fears of a revival of violence in Iraq. April was the bloodiest month in the country yet this year, with more than 300 people, mostly Shiite Muslims in the capital, killed in a series of bomb attacks. (dpa)