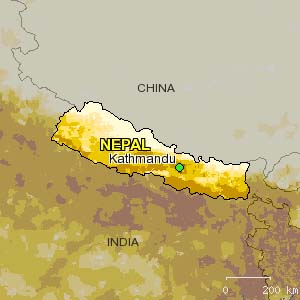 Kathmandu, Dec 29 - Slapped with a 51-hour weekly power outage from Wednesday and a warning that next month it could go up to 12 hours a day, Nepal has begun to lose its lustre as a holiday destination, especially for the budget tourist from India who crosses over the open border by bus.

The Nepal Electricity Authority (NEA) Tuesday announced that due to the power-generating rivers drying up and the demand for energy increasing, it would enforce between seven to eight hours of blackout daily.

In the coming days, NEA warned that it could rise to 12 hours daily.

Though Nepal, endowed with fast-flowing Himalayan rivers, has the potential to generate roughly 83,000 MW of power, with half of it being economically viable, less than one percent of it has been tapped, due to political instability, a decade-old civil war, and corruption.

The blackout announcement, coming ahead of New Year festivities, has cast a damper, especially on small hotels and businesses.

Even the five-star hotels, which can afford to run generators, are angered by the growing outage which will be made worse by the rising shortage of fuel from India. Banks are in distress and even the lone international airport in Kathmandu will see delayed flights and chaos.

Shops in Thamel, Kathmandu's tourist hub, are already reeling under outages, with business plummeting during power cuts. In addition, there is a marked rise in theft, robbery and other crimes during the blackouts.

While the Nepal PM is wooing Chinese investors for tourism, infrastructure and hydropower-related projects in Nepal, the dismal power situation is likely to deter new investors.

Industries along the India-Nepal border in eastern Nepal have already registered 30 percent drop in production due to the prevailing four-hour power cut daily. Doubling the period could force dozens of small businesses to fold up.

In the past, Nepal's garments industry, once one of the main props of the economy, suffered a fatal blow due to the power outages and labour turmoil.  (IANS)