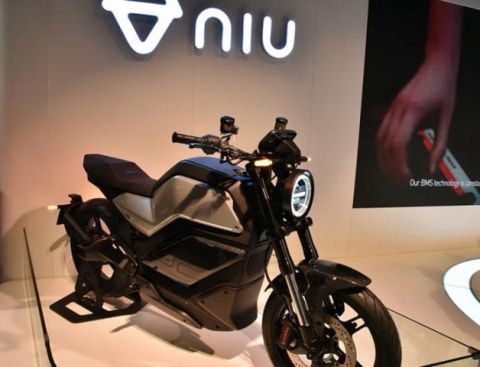 Changzhou, China-headquartered electric vehicle (EV) manufacturer Niu Technologies’ highly anticipated RQi electric motorcycle will be rolled out before the end of this year, several media reports have informed. A few days back, the Chinese manufacturer of smart electric two-wheeled vehicles took wraps off an electric kick-scooter for international markets in addition to three electric mopeds for the domestic market.

Ahead of the launch of the aforementioned EVs, the Chinese manufacturer teased a new electric two-wheeler, prompting many to predict that the NIU Technologies is preparing to launch the RQi electric motorcycle that was unveiled last year.

The NIU RQi electric motorcycle was first introduced to the world in January last year at the CES2020, when the company touted a top speed of 160 km/h (roughly 100 mph) for the new EV. According to available information, the NIU RQi will come equipped with a 30 kW (40 hp) electric motor.

A lower-spec version of the electric two-wheeler will be launched first, and it will come equipped with a 5 kW (6.7 hp) motor and a removable 72V 36Ah battery. Its top speed has been pegged at 100 km/h (62 mph). The World Motorcycle Test Cycle range has been pegged at 119 km (74 miles).

The Chinese manufacturer had originally planned to launch the NIU RQi electric motorcycle by the end of 2020, but the deadly COVID-19 pandemic wreaked havoc on product launches around the globe. During a recently conducted earnings call, the company’s Chief Financial Officer & Compliance Officer Hardy Peng Zhang admitted that the pandemic forced the company to postpone mass production of some of its planned models. He stressed that high volume growth couldn’t be achieved because of the deadly infection that forced its manufacturing facilities and supply chains to remain closed for several months.

When the company teased a new EV ahead of the launch of electric kick-scooter for international markets and three e-mopeds for the domestic market last week, the RQi took the center stage as everyone was confident that the impending release of the highly anticipated electric motorcycle would take place sooner than later.