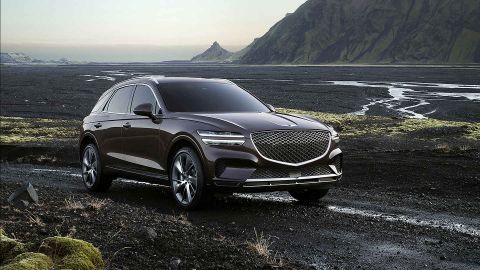 The Genesis GV60, an entry-level luxury electric crossover based on Hyundai’s Electric-Global Modular Platform (E-GMP), will officially be released within a couple of months from now, some media outlets reported. According to some unconfirmed emerging reports, Genesis is preparing to launch the all-electric GV60 crossover in June 2021. The luxury car brand has already introduced its first electric car, called the G80, at the recently-held Shanghai Motor Show. But, the manufacturer didn’t reveal much about the eGV70 and the JW EV project, which is reportedly the codename for the upcoming GV60 EV.

It is worth-mentioning here that the GV60 electric crossover is going to be the first all-electric model from Genesis, and the company is developing it as a dedicated EV. It means it will be based on a platform exclusively designed as an EV from the ground up, and developing an exclusive EV platform is really a big deal for a small luxury automaker like Genesis. While some luxury OEM can do it just by dropping an electric powertrain into an existing gasoline-powered vehicle, working on a whole new platform for use in a number of upcoming electric cars is not an easy task.

While the Genesis GV60 will share a platform with the Hyundai’s Ioniq 5 and EV6 cars, it will offer stronger motor performance along with more battery capacity. It makes sense as the GV60 will be a luxury version of the more affordable, mainstream EVs. It seems to be a part of Genesis’ bigger plan to become a top-tier EV brand.

Hyundai said in a statement, “The Genesis exclusive EV will be positioned as an electric vehicle with a higher level of performance and sensibility compared to the Ioniq 5. Genesis will be transformed into a top-tier EV brand.”

Genesis, the luxury car brand of the South Korea-based automaker Hyundai Motor Group, was initially envisioned along with the plan for the company’s luxury sedan called the Hyundai Genesis in year 2004. Officially, the Genesis brand was launched as an independent marque in November 2015. The first Genesis standalone model was the Genesis G90, which was launched in 2017. Last year, J.D. Power named it the most dependable automotive brand in North America.

The luxury car brand's first all-electric Genesis GV60 model is expected to on sale late this year or early next year. While details remain sparse, the manufacturer has hinted that it will boast coupe-like styling, a well-equipped interior, and a range of up to 310 miles on a single charge.