Congress Kicked Out Of MCD 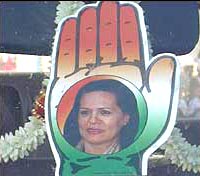 disappointed results in Punjab and Uttrakhand assembly elections, it is again huge set back for ruling Congress Party in Delhi as it was ousted from the Town Hall of Delhi. Increasing prices, sealing-cum-demolition threat, mounting power and water tariff and severe power crisis were few main reasons that resulted in the electorate to deliver a stern snub to the ruling party.

It could be the right time for party leadership to do some serious soul searching before a string of vital assembly polls lined up in Uttar Pradesh, Goa, Gujarat and Himachal Pradesh in the next one year. Following party’s poor election performances, Congress should expect more aggression from its allies such as the Left, DMK, NCP and RJD etc.

In the MCD elections, BJP emerged as victorious by winning 164 wards whereas Congress just manages to win only 69 seats of the total 272 wards. Adding more insult to the Congress, BSP is also successful in proving its emergence on the Capital’s political scenario by posting victories in 15 wards. Most of the BSP’s victorious wards feature JJ clusters, slums and resettlement colonies such Kondli, Mahavir Enclave, Narela, Bakhtawarpur and Kirari Sulemanpur. All of these areas were considered as Congress strongholds till now.

BSP’s impressive performance must be screaming to the ruling camp as competing for same vote-base with BSP is something that party would not relish. Moreover, BJP has succeeded to ground Congress in the 80 wards constituting slum dweller, dalit, and minority votes which were their traditional support base.

BJP has been successful in not only to enlarge its base in slums, JJ clusters and illegal colonies but also in consolidating hold on middle class localities. Small business groups and shopkeepers also supported BJP because of the sealing drive undertaken by the MCD. The second-rated national party also campaigned against the weak Centre government on the internal security front.

According to BJP general secretary Arun Jaitley, “The Congress was confronted with a triple anti-incumbency.” Jaitley supervision successfully steered the party’s campaign in the elections.