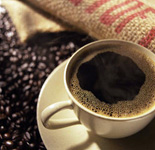 London, Sept 3 : If you're feeling angry, irritable and aggressive, and suffering from a bad headache to boot, the chance is that you are experiencing a new malady - coffee rage.

Coffee's main active ingredient caffeine may help you get awake in the morning, but a new study has found that one in 20 people have an intolerance to it.

This means that they not only feel itchy, depressed and tired, but also get joint pains and migraines usually within an hour of drinking a cup.

These symptoms, experts say, are leading to the new phenomena they call coffee rage.

A spokesman for YorkTest, who carry out food and drink intolerance tests, said that with coffee shops booming in the UK, as well as the fact that there are coffee machines at every home nowadays, this problem is only going to grow.

"The High Street is full of coffee shops and people have machines at home producing stronger coffee than they used to drink. There appears to be a tipping of the scales in terms of what the body can take," the Sun quoted him, as saying.

Among the more famous people who suffer from coffee rage is actor Hugh Grant who admits: "I get coffee rage. It comes after drinking Nescafe. It's the world's most delicious coffee but I get foul - really foul - an hour later."

Singer Robbie Williams is another celebrity with a similar problems. He checked into rehab in February when his habit reached 36 espressos a day.

He was also drinking caffeine-rich Red Bull as well.