Clinton will be Secretary Of State provided vetting process is smooth 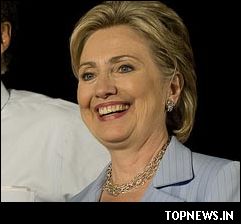 New York, Nov. 20 : New York Senator Hillary Rodham Clinton has reportedly confided to long time friends and advisors that she will consider taking up the post of Secretary of State in the Obama administration, provided the vetting process goes smoothly.

The CBS quoted sources as saying that a formal announcement of her selection could happen in the next week.

Obama transition officials say other candidates have been vetted for the job, but the New York senator has emerged as the leading contender.

Associates say Hillary Clinton has been told that Obama wants her to be Secretary of State, although accounts differ on how bluntly and directly Obama made the overture.

"Would she be willing to give up her independent stature in the U. S. Senate, Robert F. Kennedy''s seat, to be in the Cabinet? It will be a considerable decision for her," said Lanny Davis, a former Clinton adviser not involved in the vetting.

"It''s a completely different life than you lead in the Senate, where you are your own spokesperson, your own advocate. When you join the Cabinet of the president of the United States, that is no longer the case," he added.

Hillary Clinton declined to discuss any part of the selection process Tuesday. "I''ve said everything I have to say on Friday," she said.

Since Sen. Clinton has emerged as a top contender for the State job, her husband''s international business deals and the fundraising he has done for his foundation and presidential library have come under careful review by Obama''s transition team.

The former president had indicated earlier that he would be willing to significantly increase the transparency of those activities if it would boost the former first lady''s chances of getting the job.

A team of attorneys is representing the Clintons in negotiations with Obama officials, in talks that have taken place this week at a law firm in Washington.

Aides familiar with the negotiations said the vetting has gone smoothly and both Clintons had been fully cooperative with the process.

Clinton''s network of business deals and charitable endeavors became an issue during Hillary Clinton''s run for the Democratic presidential nomination.

At the State Department, the prospect of Clinton as secretary is creating some anxiety among career foreign service officers worried that she would install her own loyalists and exclude them from policy-making.

Some at the State Department see her as a foreign policy lightweight, although there is grudging acknowledgment of her star power. Others closer to the Obama camp have criticized Clinton''s credentials for the job. (ANI)