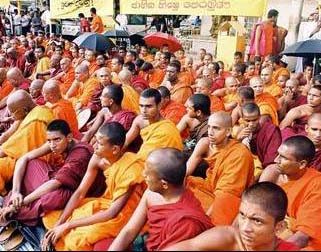 Buddhist monks in Bodh Gaya have raised a stink over prayers being disrupted at the Mahabodhi Temple on Friday because President Pratibha Patil was visiting the area.

The monks were conducting a ten-day long chanting of the scriptures of the 'Tipitaka', the collected teachings of Lord Buddha written in Pali.

They also protested against pictures of the President and Bihar Chief Minister Nitish Kumar being placed above Lord Buddha in a poster, which they termed as disrespect to the lord.

During her visit, President Patil said the teachings of Lord Buddha should be adopted by all humans.

"The path shown by Lord Buddha to the whole of humanity holds significance for us even today. Mahatma's movement was based on the principles of Ahimsa and Love. He showed the path of knowledge to the entire world," Patil said.

The site of the Mahabodhi Temple is the place where Lord Buddha is said to have enlightenment.

Patil, who is on her first official visit to Bihar since assuming office in July 2007, will also visit places of historical importance at Nalanda, Bodh Gaya and Vaishali, besides the Gurudwara Patna Sahib in Patna. (ANI)