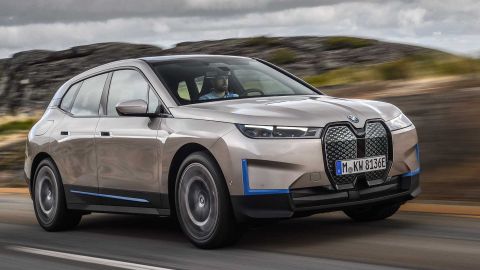 German luxury vehicle manufacturer BMW has officially announced that it will start shipping the iX electric SUV in November, but some units of the eagerly-awaited e-SUV has been spotted in Poland, which suggests that deliveries to customers can start sooner than previously announced.

The fully-electric BMW iX e-SUV is already in production and it dozens of its units made their presence felt at the IAA Mobility 2021.

Some photos of the BMW iX SUV being delivered to an unknown location in Poland are swirling around the Internet. In the photos, several units of the iX e-SUVs are seen on the back of a huge transport truck. All the units have registration numbers and they are featuring the new green number plate that electric vehicles (EVs) get in Poland these days.

However, there is a strong possibility that that the iX e-SUVs seen on the back of a huge transport truck are not for customer deliveries. In that case, those e-SUVs could just meant to be displayed somewhere in Poland. Most probably, those units might be going to be displayed at BMW dealerships or in pop-up stalls in places like malls in the country. If that is the case, the units in question will most likely end up getting sold at a discount sooner or later.

The innovatively-designed BMW iX is the German luxury car brand’s next-generation e-SUV, and it will come only as an all-wheel drive (AWD) vehicles. It will feature two electric motors, one driving the front axle and the second driving the rear axle. They combine to produce up to 516 hp. Its power and range will put it firmly against the likes of the Tesla Model Y.

In terms of pricing in Germany, the BMW iX e-SUV starts at €77,300, while the more powerful variant will set the buyer back by €98,000. In the United States, pricing kicks off at $83,200 (excluding destination charges).