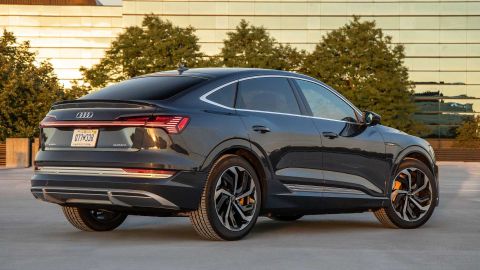 Audi AG, the luxury car brand of German automobile giant Volkswagen Group, has finally taken the wraps off the first of its three ‘sphere’ EV concepts, providing a glimpse of what the brand’s next-generation super cars will look like. The just revealed ‘sphere’ EV concept, dubbed Skysphere, a sleek two-door grand electric convertible that blends high-tech features with the amenities of a luxury car.

It features an eye-catching look with a closed grille, sleek headlights, glass covered luggage space, and full-width lighting on its rear. Some active aerodynamic elements on the front and rear further add to its look as well as performance. Its wheelbase can be shortened by 249 mm, while height can also be shortened by 10mm to convert it into an attractive sports roadster.

Its cockpit is digital with retractable steering wheel and pedals have been designed in such a way that they stow away when the car is driving itself.

Audi CEO Henrik Wenders said during a media event, “This is what we call progressive luxury. This is not rather a car, it’s an experience device. It is a concept showcasing us how we are combining both an automotive driving experience with an immersive digital experience. This is two-in-one.”

He also noted that Audi has plans to exclusively produce and offer only electric cars by 2033, following the introduction of its last internal combustion engine-equipped car in 2026. After 2026, Audi will produce no new ICE cars. However, existing models will likely continue to go on sale until at least early next decade.

Gael Buzyn, head of the company’s Malibu-based design studio, added that the Skysphere has a lot of elements that will make their presence felt in the brand’s future vehicles.

The new 1.8-ton EV concept can drive autonomously, but it also allows the driver to take control and enjoy the 623 hp and 553 pound-feet of torque, which allow the vehicle to accelerate from zero to 100 km/h in just 4 seconds. According to the manufacturer’s claims, its 80kWh battery pack is efficient enough to cover more than 500 km or roughly 310 miles on a single charge.

The second ‘sphere’ EV concept, called the Grandsphere, is slated to be introduced on1st of September this year, followed by the third concept called Urbansphere sometime in the first half of 2022.

The Audi Skysphere represents what the luxury car brand can achieve in the coming years as it is accelerating the pace of its transition from conventional gasoline-powered engines to electric powertrains and autonomous vehicles.