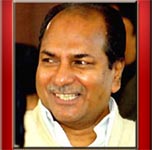 Kochi, Feb 28 : In wake of last year''s terror attacks on Mumbai and the failure of on the part coastal security to nab the perpetrators, the Indian Navy will create a new specialized force called the " Sagar Prahari Bal" to protect naval bases, assets and the island territories of India.

Defence Minister A. K. Antony said the Government has taken a number of steps to strengthen maritime security agencies like the Navy and the Coast Guard by increasing their assets like manpower, ships, boats, helicopters, aircrafts, boats, etc.

"The Sagar Prahari Bal will comprise of 1000 personnel and will have 80 Fast Interception crafts for sea front patrolling," Antony told reporters on the sidelines of the Keel laying ceremony of the first indigenous aircraft carrier for the Navt at the Cochin Shipyard Limited.

Antony announced that the Indian Navy would now take charge of the overall maritime security, including that of coastal and island security.

He further said that four joint Operation Centres would be set up at Kochi, Port Blair, Mumbai and Visakhapatnam. (ANI)