2023 Chevrolet Bolt EUV to be available in Redline Edition; production to start this summer 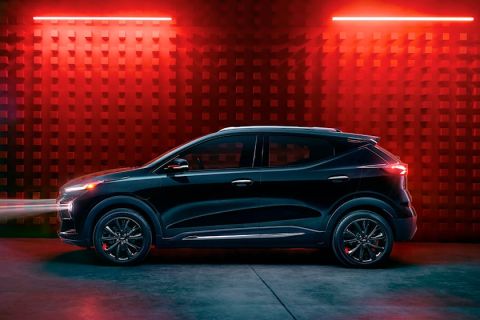 Detroit, Michigan-headquartered American automotive manufacturing giant General Motors has announced that production of the 2023 Bolt EUV will be commenced this summer, with the Redline Edition added to the lineup as a new option.

With the sole exception of the 2023 Chevrolet Bolt EUV Redline Edition, the rest of the Bolt EV lineup will carry over unchanged. The Redline Edition is actually an appearance package that the American brand has been offering on some of its gasoline models for the past few years.

When it comes to the interior, the Redline Edition features black leather upholstery with red accent stitching. It is the same in with the LT or Premier trims. Previously, that was usually part of an optional Convenience Package on the higher-end Premier trim.

As per the manufacturer’s claims, the Redline Edition is exclusive to the Bolt EUV, which is essentially a better Bolt EV with a little extra space and semi-autonomous driver assistance feature called Super Cruise.

A spokesperson for GM also confirmed that except from the Bolt EUV Redline Edition and one new color option for both the EV and EUV, everything else will carry over for the next model year.

Making the announcement, the spokesperson said, “Aside from the Bolt EUV Redline Edition and one new color option—Radiant Red Tintcoat—for both the EV and EUV, everything else carries over for the 2023 model year.”

It may be noted here that both the Bolt EV and Bolt EUV comes equipped with the front-wheel drivetrain, 200-horsepower electric motor, and a 65-kwh battery pack. The setup promises an EPA-estimated driving range of 259 miles (roughly 417 km) for the Bolt EV and 247 miles (397.5) for the Bolt EUV on a single charge.

Pricing details for the 2023 model year will likely be confirmed ahead of the start of the EV’s production later this year. However, most market experts expect the upcoming EV to be available at a pocket-friendly price less than $35,000. It is worth-mentioning here that the 2022 Bolt EV's $31,995 base price represented a price cut of $5,500 from the 2021 model.