The wheel has turned in England's favour: Pietersen 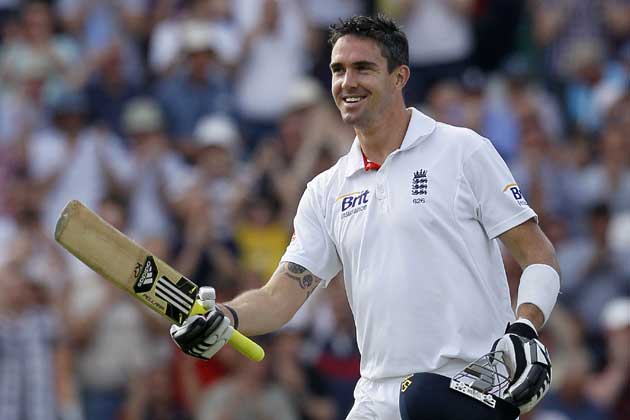 London, Aug 20 : Former England captain Kevin Pietersen, who hit a brilliant 175 at The Oval in the first innings against India, feels great to be part of a team where guys are hitting hundreds in an amazing way.

Pietersen and Bell (181 not not) were involved in a 350-run stand for the third wicket Friday that took England to a mammoth 457 for three after the first day's play.

Pietersen, who is now on 19 Test centuries along with Alastair Cook and Andrew Strauss, belives the English top-order will get past the England record of 22 centuries, which is held by Geoffrey Boycott, Wally Hammond and Colin Cowdrey. Bell, who moved to his 16th Test century, is just 19 runs short of his maiden double century.

"They (the top five) are all going to go past the record," said Pietersen. "To be part of a team where guys are hitting hundreds like this is amazing. "It's nice to be able to strike the ball like that today - what a good day for us."

Pietersen said the team deserves to be the No. 1 in Test after all - it has put in some hard work in the last two years.

"Look at how hard this team has worked over the last two years. The wheel has turned. If someone misses out, then another one stands up," he said.

On Bell, Pietersen added: "He has been magnificent over the past 12 to 18 months. He has grown as a person. He has matured so much and I love the fact he is scoring runs so fluently. He is so pleasing on the eye when he is batting and it is nice he has got to his 16th Test hundred and there are going to be many more from that man because he is really doing a good job. The hard work he has been putting in since the West Indies tour in 2009 is paying dividends at the moment."

Pietersen was also happy to score his fourth Test century at his home ground.

"Getting Test hundreds is something you dream of as a kid and when you are making your way in the game, so to score four here is pretty cool," he said.(IANS)