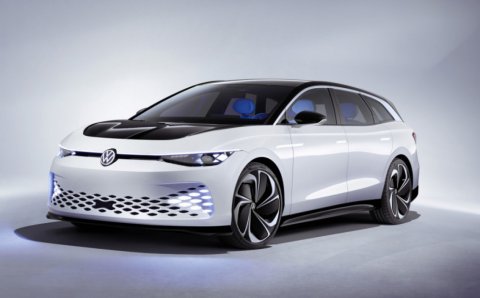 A Volkswagen (VW) electric sedan concept developed under the codename “Aero B,” will make its world debut at the 2023 Beijing Motor Show before entering production in the second half of next year. VW brand chief Ralf Brandstätter used the group’s recently-held annual press conference to give an insight into the brand’s future EV plans, and confirmed that the Aero B will be launched next year.

A full sketch of the concept EV, showing attractive silhouette of a sedan with flowing lines, appeared behind the top executive at the annual press conference. The image of the electric sedan revealed that the upcoming EV will have sporty-looking front, generous air intakes, coupe-style roof and big wheels.

According to Brandstätter, the Aero B’s aerodynamic design will help it obtain its impressive range. The manufacturer claims that concept car is capable of delivering a range of 435 miles (roughly 700 km) on a single charge. That is not surprising at all, especially when we take the design sketch as well as the model's provisional name into account.

The Aero B (which is also called the ID Aero) will serve as the electric equivalent to the internal combustion engine-powered Passat. It will compete with the likes of the Tesla Model 3, Polestar 2 and some other upcoming electric sedans.

The German manufacturer has plans to offer new EV in various versions of an electric sedan as well as a wagon. It will come first as a sedan, and then as a wagon. Its wagon body style will take inspiration from the ID. Space Vizzion Concept. Both models will be based on VW's EV-dedicated MEB modular electric car platform, and interiors of both will likely offer Phaeton-levels of space despite having Passat-like dimensions. One can expect the EV to offer a choice of rear wheel drive (RWD) and all wheel drive (AWD) powertrains. A GTX-badged performance variant of the EV will reportedly use the company’s most powerful dual-motor setup.

Deliveries of the VW rival to the widely-popular Tesla Model 3 electric sedan will commence sometime in the second half of 2023, with China scheduled to be the first market to receive the EV.

The Aero B will be followed by the Trinity sedan – VW’s new flagship electric sedan based on the SSP architecture. The Trinity will be produced at the group’s new factory that is being erected in Wolfsburg near the existing Golf factory, with production scheduled to start sometime in 2026.