US: Black-colored Tesla Model Y spotted ‘in the wild’ near Palo Alto 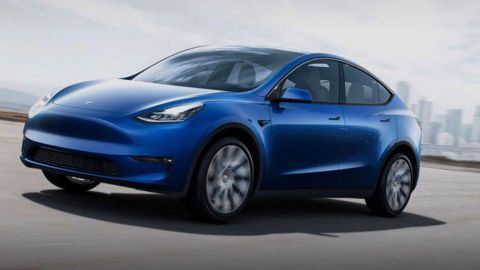 US electric vehicle maker Tesla’s upcoming Model Y crossover SUV -- scheduled for launch in 2020 -- was recently spotted ‘in the wild’ close to the company’s headquarters in Palo Alto, California. The vehicle was of black color, which marked a new color for a Tesla vehicle.

A short video of a moving black-colored Model Y has been released by a Tesla Motors Club forum user Cstreet. The video shows the black Model Y driving around in Portola Valley, which is located at a distance of a few miles from Tesla’s headquarters.

Previously, a Model Y was spotted in May 2019. However, that spotting was apparently a marketing effort by Tesla to gather some footage, because there was a camera car following the vehicle. But, this time, the black Model Y was not followed by a camera car.

Going by Cstreet’s video showing different views of the black Model Y, the vehicle spotted in the wild was fairly similar to the version officially unveiled by Tesla. The video specifically shows that the black Model Y with 19-inch gray sport wheels, and a less ‘flashy’ exterior resulting from the ‘chrome delete’ modification witnessed at the unveiling.