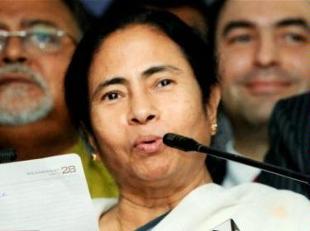 Agartala, April 1 : The Congress, the BJP and the CPI-M have formed a covert alliance to capture power at the centre and her Trinamool Congress is the only fighting against them, West Bengal Chief Minister Mamata Banerjee said Tuesday.

"The Trinamool Congress alone has been fighting against the Congress, BJP (Bharatiya Janata Party) and CPI-M (Communist Party of India-Marxist). CPI-M would soon be voted out from Tripura," she said while addressing an election rally in southern Tripura's Santir Bazar, 100 km south of here.

"Trinamool's 30 to 35 MPs in the new parliament would be voiced for the interest of Tripura, its problem. Trinamool can solve the problems of Tripura, not the CPI-M. Congress, BJP and CPI-M's secret deal must be exposed," said Banerjee, also the Trinamool supremo

"Fighting single-handedly, I have ended the 34 years of misrule of the CPI-M led Left Front in West Bengal and it is possible here (Tripura) also," she said and asserted that her government was trying to help growth and development of cultural talents in Bengal.

In her 40-minute speech, Banerjee said that her government in less than two years of rule, has set up eight university, 31 government colleges and 14 private colleges in West Bengal.

"On the contrary, there is no university in Tripura and there are no water, electricity and health facilities in vast areas of Tripura."

"We have launched special schemes for the young girls and youths. There is no such scheme in the Left-ruled Tripura. 'Mafia raj' (criminal rule) exists in Tripura. There is no governance in the state," she claimed.

"Complete misgovernance exists in Tripura," Banerjee said and urged the people to oust the Left government in the state.