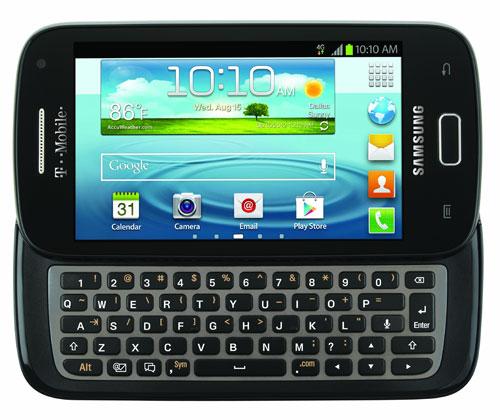 With T-Mobile being the only one of the four bigwig US carriers - the other three being AT&T, Verizon and Sprint - which will not be selling the forthcoming Apple iPhone, the company is apparently banking on its exclusive new Android smartphone, the midrange Samsung Galaxy S Relay 4G, to soften the iPhone blow.

The Samsung Galaxy S Relay 4G is hitting the budget-friendly T-Mobile's stores on September 18; priced at $150 after a $50 mail-in-rebate with a new service contract for two years.

Apparently, the launch timing of the Galaxy S Relay 4G will help T-Mobile better face the forthcoming onslaught from the iPhone 5 - which goes on sale on September 21 -, largely because the middle-range handset boasts a slide-out QWERTY keyboard as well as a horde of other enterprise-friendly capabilities, like Microsoft Exchange support and a virtual private network (VPN) option.

While the inclusion of the corporate-specific capabilities in the Galaxy S Relay is seemingly an indication that the handset is aimed at those BlackBerry users who are thinking of switching to the iPhone, some of the other features of the new Samsung offering include a 4-inch display; a 5-megapixel camera; and 4G LTE connectivity.

One of the most attractive features of the Galaxy S Relay 4G - which runs the Android OS version 4.0 `Ice Cream Sandwich' - is the carrier's T-Mobile TV advantage, under which a nominal monthly fee is charged for offering a combination of live shows and on-demand features from popular channels.