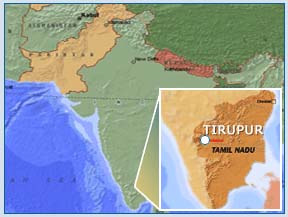 The court imposed the penalty on the Tirupur industrialists, known for giving tough competition to cotton garment exporters from China and Bangladesh, saying that the principles of 'polluters pay' and 'sustainable developments' enshrined in the country's environmental laws have to upheld.

The court noted that the Tirupur industrial hub provided employment to 500,000 people and earned about Rs. 100 billion in foreign exchange annually for the country, but maintained that polluters have to pay up.

A bench of Chief Justice K. G. Balakrishnan and Justice B. S. Chauhan imposed the heavy cost on the Tirupur industrialists, dismissing their joint appeal against a 2006 ruling of the Madras High Court. The lower court had imposed the fine for cleaning and desilting the river, which is now virtually beyond redemption, and paying damages to farmers whose land had lost its fertility due to the polluted water.

The apex court, in its ruling pronounced Tuesday but released late Wednesday, gave the polluting industries three months to pay the fine. The court in fact had made the Tirupur industrialists deposit a sum of Rs. 250 million with the Madras High Court during the adjudication of their lawsuit.

The high court had given its ruling on a public interest lawsuit filed by a civil society group called Noyyal River Ayacutdars Protection Association, which had sought the court's intervention for keeping the Noyyal river free from pollution and for the preservation of the ecology.

The petitioners had gone to the high court contending that Tirupur industrialists had been discharging industrial effluents into the river, turning it into a poisonous drain and making its water unfit for drinking and irrigation.

"The pollution had also adversely affected the Orthapalayam reservoir and other tanks and channels of the river," the petitioner contended.

The apex court bench ruled: "There has undoubtedly been unabated pollution by the Tirupur industries represented here by the Tirupur Dyeing Factory Owners Association.

"The principles of 'polluters-pay' and 'sustainable development' (imbibed by Indian environmental laws) have to be upheld," the bench said.

"It becomes the responsibility of the members of the appellant association that they carry out their industrial activities without polluting the water.

"A large number of farmers have suffered because of the pollution caused by them. They could not cultivate any crop in the said land," the bench ruled while asking industrialists to pay compensation for the loss of livelihoods. (IANS)