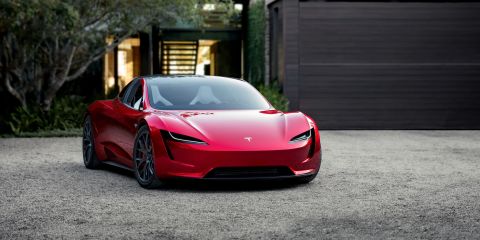 The second-generation of Tesla Roadster which was recently unveiled at the Petersen Automotive Museum in Los Angeles, will reportedly enter the market sometime in 2023. The upcoming all-electric Roadster is the successor to the American EV manufacturer’s first production electric car, the 2008 Tesla Roadster.

The second-generation Roadster was first unveiled in 2017. Thus, Tesla fans have already waited for four years to see the EV getting launched. If we believe the emerging reports, potential buyers will still have to wait for two more years to get their hands on the eagerly-awaited EV.

When it was first unveiled four years back, the company had announced plans to roll out the EV in 2020. However, Tesla Motors has missed its own timelines repeatedly. Thus far, the EV giant’s plans to place the Roadster in production lines have been hit adversely by a number of factors, including the COVID-19 pandemic and supply chain issues. The global shortage of semiconductor chips forced several manufacturers, including Tesla to either delay or cancel the production of various EVs. The repeated postponements of the Tesla Semi and Tesla Cybertruck have also been caused by the same issues.

Elon Musk, the chief executive of Tesla Motors, once took to social-networking site Twitter to state, “2021 has been the year of super crazy supply chain shortages. So it wouldn’t matter if we had 17 new products, as none would ship.”

Hence, the year of 2022 must be rather calm, affable to manufacturing business, because any issue like global shortage of semiconductor chips could lead to further postponement of the Roadster and other EV projects.

The base model of the next-generation all-electric Tesla Roadster will come equipped with a 200 kWh battery pack that will store enough power to deliver an impressive range of 620 miles (998 km) on a single charge. In terms of acceleration, it boasts to have the ability to sprint from 0-60 mile per hour (96.5 km/h) and 0-100 miles per hour (160.9 km/h) in just 1.9 seconds and 4.2 seconds, respectively. Top speed has been pegged at more than 250 mile per hour.

Other notable features and specs include all-wheel drive (AWD) powertrain, three electric motors (one for front axle and two for rear wheels), system output of 288 horsepower and 273 lb-ft of torque.