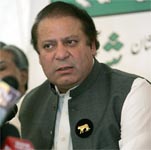 Sharif said Bush's wrong policies for the region were aptly supported by Musharraf which has resulted in the present day scenario where Pakistan is facing dangerous threat from rising extremism.

"Bush gave blind support to Musharraf and turned a blind eye to all the atrocities at home that he committed in his eight year of dictatorial rule," The News quoted Sharif, as saying.

Sharif said that Musharraf never wanted to establish democracy in the country.

"He never was keen that Pakistan should get back to the democratic path," he said.

Commenting on the revamped US policy for Pakistan and Afghanistan, Sharif said it was not much different from the one pursued by the Bush Administration.

"Obama has now come up with a new policy with little changes, very minor changes as compared to the last policy," Sharif added. (ANI)