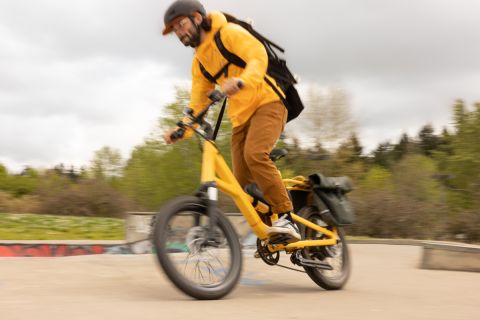 Launched after the urban-centric Co-op CTY e2.1 and CTY e2.2, the Generation e1.1 and e1.2 are reportedly the most accessible e-bikes REI’s new “Generation e” line. Both new models feature an easy-to-mount low frame, and smaller diameter 20-inch wheels in wider 2.4-inch motorcycle-inspired tires. The e-bikes have been designed in such as way that users can easily hop on and go. The frame of the bikes promises approachability and versatility, for new as well as experienced riders.

Nate Nielsen, General Manager (GM) for REI cycles, said, “This e-bike line was designed to help make it easier for people to hop on and go. The frames and features give them approachability and versatility, whether you're a new or seasoned rider, dressed in workout gear or jeans.”

The one-size-fits-most sizing doctrine means the bikes are apt for riders of almost all sizes. For safety and visibility, both of the two new e-bikes come equipped with front as well as rear LED lighting, while its memory foam saddle promises optimal comfort even during long rides. The manufacturer has also equipped the e-bikes with dual Y-style kickstands.

The two models also differ in terms of suspension fork and racks. The e1.1 has a Suntour suspension fork, and includes an integrated rear rack. The e1.2 e-bike has a more cargo-optimized rigid fork and includes front as well as rear racks. However, both e-bike models weigh 54 lb. (24.5 kg).