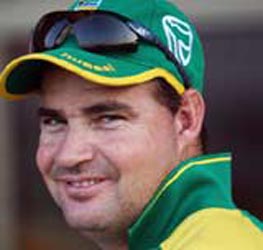 Australia''s top five batsmen were all dismissed for single figures in Sunday''s second game at Centurion where the tourists were bowled out for 131 with only No. 6 batsman Callum Ferguson and tail ender Mitch Johnson (30) scoring more than 10.

Australia captain Ricky Ponting says he and openers Brad Haddin and Michael Clarke need to fire if the tourists are to post a competitive score in Cape Town on Thursday.

"We''ve got respect for Johnson down at eight so they do theoretically bat down to eight. We see that with Mike Hussey at five now, he''s there to marshal the team toward the back end. I think it''s crucial that we can get amongst Haddin, Ponting and Clarke pretty early. If we can get two of those early, we do expose the middle order to the newer ball which is something that we''ve wanted to do. We were able to do that on Sunday and I think we saw the result," Fox Sports quoted Arthur, as saying.

"I think Ponting, Haddin and Clarke are the keys obviously to Australia getting a big score," he added.

Ponting pointed out on Sunday he hadn''t made a ODI century for more than a year and says he needs to lift his performance up. He also backed Clarke and Haddin to lead the way on Thursday.

"We don''t need wholesale changes. We need to get those guys to play a little bit better," Ponting said.

"We need to get a lot more consistency out of us for the remainder of this series," he added. (ANI)