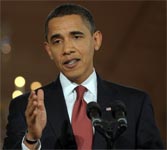 New York, Apr 29 : US President Barack Obama is said to have showed off his talent during the visit of the NCAA champion University of Connecticut women''s basketball team to the White House.

The President showed he was an ace shooter during the game on April 27, after he praised the team for their undefeated season, and had a game with them on his small court on the South Lawn.

All-American point guard Renee Montgomery, came back 10 minutes into the game, and revealed that Obama can play.

"The President can shoot!" the New York Daily News quoted her as shouting.

Obama credits the Huskies and cited their hard work and team play as an example.

"Our young women today look at themselves differently, especially tall, young women, like my daughters. And so, as a father, I want to thank all of you," he said. (ANI)