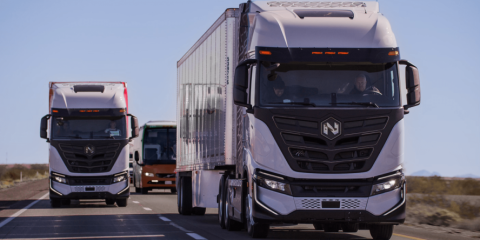 Nikola Corporation, an American manufacturer of heavy-duty commercial BEVs and FCEVs, has announced the opening of order books for the Tre BEV – a battery-powered zero-emission truck that claims to have the potential to revolutionize the field of commercial trucking.

IVECO, an Italian multinational transport vehicle manufacturer, will be responsible for building the Nikola Tre for Europe. The European version of the commercial vehicle is scheduled to be built at the Italian truck maker’s Ulm, Germany-based factory. Meanwhile, Nikola is in the process of completing the second phase of its manufacturing plant in Coolidge, Arizona.

The electric truck is based on the Iveco S-Say heavy-duty electric vehicle, but it has been equipped with Nikola’s electric & hydrogen fuel cell powertrain technology. The European version of the Nikola Tre BEV truck has a quoted range of up to 530 km (approximately 329 miles), while its fuel cell version is capable of covering a distance of up to 800 km (approximately 497 miles).

For the European version of the electric truck, battery capacity has been reported at 738 kWh, which is good for roughly 530 km (330 miles) and consumes 100 minutes to recharge from 10 to 80 per cent at a peak charging speed of 350 kW. It features a 645 hp e-axle, which has specifically been designed by FTP Industrial for the truck.

At present, Europe order books are only open for the truck’s European 4x2 Artic version. The Tre FCEV Artic 6x2 truck, the fuel cell version of the truck that will come equipped with large battery pack plus 70-kg hydrogen tank, will be made available sometime later.

Announcing the opening of the order books for the Tre BEVs, Nikola also confirmed that deliveries of the commercial electric truck in the United States are scheduled to start in the second half of 2023, while European customers will get their pre-ordered units sometime in the first half of 2024.