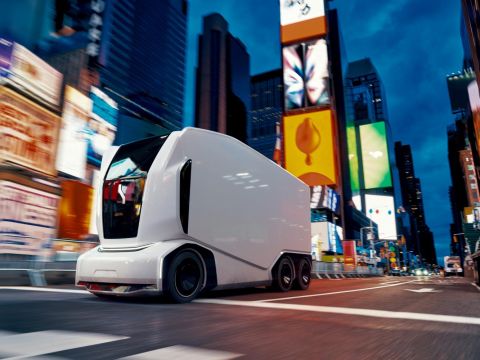 Einride, a Swedish freight technology startup having specialization in electric and self-driving vehicles, has announced that the US National Highway Traffic Safety Administration (NHTSA) has permitted it to operate its Autonomous Electric Transport (AET) vehicles on public roads.

The so-called AET vehicles have specifically been designed to operate without a driver onboard. Now, these innovative, driverless commercial vehicles will be able to run American public roads, thanks to the NHTSA’s permission. The Swedish tech startup has plans to conduct a public road pilot project for the autonomous commercial EVs in Tennessee sometime in the third quarter (Q3) of 2022.

GE Appliances will be used to support the EV’s operational flows and thus showcase the self-driving electric pod's purpose-built functionality for commercial operations in the future.

It is worth-mentioning here that it is the first time that a purpose-built autonomous electric truck/pod has been permitted to run on public roads in the U.S. It is, in fact, an industry first for this type of autonomous vehicle.

The self-driving commercial vehicle doesn’t even have room for a driver on board as the startup has built it without a conventional front cab. A Remote Pod Operator operates it remotely. All the functions, including steering, acceleration and braking, will be performed by remote operators over a cellular network. According to Einride, the remote operator will play a critical role in safely operating autonomous vehicles. The new technology will keep humans in the loop and create new jobs.

Robert Falck, Chief executive Officer (CEO) at Einride, noted that AET-like vehicles have never before been seen on public roads in the U.S.

Speaking on the topic, Falck added, “The pilot marks a major milestone as a turning point for the future of the freight industry. We know the autonomous and electric technology of our pod will not only revolutionize transportation but also create thousands of jobs and help America stay competitive.”

For his part, GE Appliances Supply Chain’s Vice President Bill Good added that the pilot was part of their efforts to create a more sustainable as well as efficient supply chain operations through increased electrification and automation technologies.

Einride has equipped its AET vehicles with the typical suite of hardware that we find on self-driving cars, such as an array of cameras, lidars and radars. Each AET vehicle/Pod has a 360-degree awareness of its surroundings, which removes the need for a driver and results in no blind spots for improved safety.