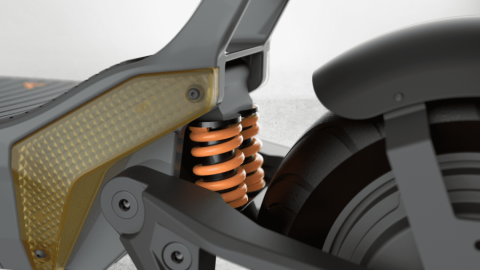 The newly introduced 2022 Apollo City electric scooter (e-scooter) has been built using all the feedback that the manufacturer received from its massive community over the years. The new Apollo City e-scooter features a wide deck that offering a plenty of foot space to ensure a comfortable ride. A whole slew of new specs and features on the handlebars add to its utility as well as styling.

The Apollo City comes equipped with a 500W rear hub motor, while the City Pro boasts dual 500W hub motors. As the hub motors have a peak rating of 1,000W, the City Pro is capable of delivering a peak power of 2,000W.

In terms of speed, the City version of the e-scooter hits up to 27 mph (43.5 km/h), while the Pro delivers even higher fun blasting speed of up to 32 mph (51.5 km/h). The City version’s top speed of 27 mph seems to be enough for most riders, but it is always nice to get some speed boost.

It is also worth-mentioning here that the 65 lb. (29.5 kg) City Pro is slightly heavier than the 57 lb. (26 kg) City, thanks to the bigger battery. However, the City Pro also supports a higher maximum load. More precisely, the City version is capable of carrying a 220 lb. (100 kg) of load, while the Pro has got a max load rating of 265 lb. (120 kg). The suspension and tires of the e-scooter are also impressive. The 10-inch tires are 3.5-inch in width, promising a balanced ride.

Even the price of new Apollo City 2022 e-scooter seems nicely balanced. The City version is available with a price tag of $1,299, while the City Pro is on sale for $1,599. Both mark a discount of $200 from their MSRP.