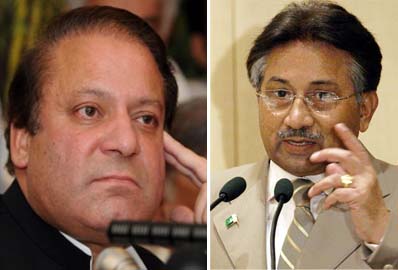 During a press conference here, when Sharif was asked to respond on Musharraf's plan to assume charge of the country once again, the PML-N chief said: "He (Musharraf) is insane to think so."

"The parliament was dissolved, prime minister was held hostage at gun point and judges were ousted. The mindset of taking control of everything through power should be changed, or else the whole country would fall victim to this mentality," The Daily Times quoted Sharif, as saying.

He urged political parties to join hands and fight the threat together.

Sharif urged Prime Minister Gilani to call an all party conference to reach a national consensus on pending issues.

"Rule of law provides guarantee to keep the people united. I have written a letter to the Prime Minister for convening the conference in the wake of the country's grave situation. Political parties, Baloch leaders, intellectuals, army, civil society and all stakeholders should sit together and evolve a national agenda," Sharif said. (ANI)