Mumbai attack: India's restraint should not be seen as weakness: Antony 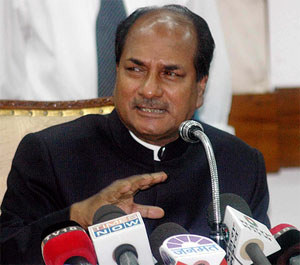 Yelahanka (Karnataka), Feb. 11: Defence Minister A. K. Antony on Wednesday said that India''s descision to maintain its restraint in connection with Pakistan''s probe of the dossier on the November 2008 attack should not be seen as a sign of New Delhi''s weakness.

Addressing the media on the sidelines of the Aero-India show here, Antony said: "India''s keeping restraint should not be considered its weakness. Our armed forces are fully prepared and we are reassessing our diplomatic options as well."

He further went on to say that the country has to be ready to confront any challenges to its sovereignty and territorial integrity.

"Considering the present scenario around India, the country will have to be ready to meet any challenges, and India, is making all efforts to ensure that incidents like the Mumbai attack don''t occur in the future," the Defence Minister said.

Expressing his delight at seeing the range of aircraft from all over the world on display at this Aero-India show, including the Light Combat Aircraft (LCA) Tejas, the Advanced Light Transport Aircraft (ALTA) Paras, Euro-fighters, F-18s, MiG 35s, Sukoi 30s and F-16s, Antony said: "I was excited to see the performance of the LCA as the country''s Defence Minister."

However, he acknowleged that the country''s armed forces were in need of modernisation, and ensured that nothing would come in the way of meeting this targetted objective.

"Modernisation of the armed forces will be given top priority despite the country''s economy facing a slowdown," Antony said.

Commenting on the Indian Government''s proposed plan to acquire 126 fighter aircraft, the Defence Minister said: "There is tough competition and contracts will be dealt with in a transparent manner. No compromises will be made on quality."

Dispelling rumours surrounding the government''s acceptability of the LCA and the Main Battle Tank (MBT) Arjun, he said that these two projects are "on the verge of sucessful completion."

Antony also handed over the keys of the Advanced Light Helicopter (ALH) "Dhruv", which was on display at the air show to the Ecuadorian Air Chief, marking the first export of the Dhruv ALH from Hindustan Aeronautics Limited.

Talks are also on with Mauritius and Surinam for exporting "Dhruv".

The seventh edition of the five-day show would see the participation of 592 companies from 25 countries -- 303 international and 289 Indian. In size and number this is going to be the biggest air show hosted by India, so far.

Billed as Asia''s premier event in the aviation sector, the five-day international trade expo-cum-conference will showcase an array of fighter jets, helicopters, transport and civil aircraft, unmanned aerial vehicles and a host of products/technologies that form the eco-system of the multi-billion dollar global aerospace industry.

Aero India 2009 will provide an ideal window of opportunity for companies to not only network with the Indian Industry but also to benefit from the sharing of expertise in the fields of research and development production and product support with other global players.

A 10 member Chinese delegation is here for the show for the first time. Defence Ministers of France, Peru, Bolivia, Surinam, Mongolia, Oman and Maldives will also witness the show. Sixteen junior ministers and Air Force chiefs of 11 countries are also Participating in the Aero India 2009.

Aero India 2009 is organised by the Ministry of Defence and managed by the Confederation of Indian Industry (CII).