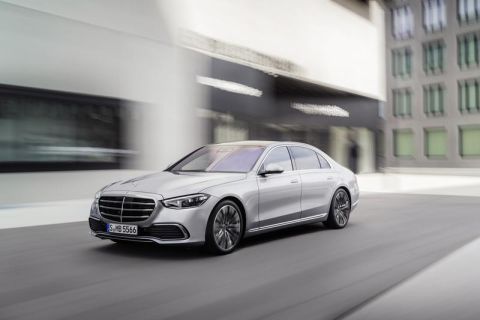 Luxury automobile maker Mercedes-AMG is working on a top-of-the-line S63 model with a plug-in powertrain, a new video of the super sedan with a thin camouflage wrap lapping the well-known Nurburgring race track suggested.

The S63 plug-in hybrid is part of the Mercedes S-Class, which comes packed with luxurious features and cutting-edge amenities, and sits at the top of the luxury carmaker’s lineup. A new YouTube video shared by Carspotter Jeroen shows the car on the Nurburgring race track.

In the video, one can see the Mercedes S63 with its front & rear fascias covered with a thin camouflage wrap, but the wrap only hides the minor changes that the manufacturer might have made to the styling of the super sedan. According to emerging reports, the S63 will ride lower on the suspension and wear the world-renowned brand’s Panamericana grille and AMG’s trademark quad exhaust pipes. In addition, it will receive other performance upgrades like bigger and more powerful brakes.

The automaker is trying its best to keep the upcoming S63’s powertrain details under wraps, but experts are of the view that Mercedes will pair a twin-turbocharged V8 with an electric motor that will be powerful enough to produce an output of more than 700 horsepower (roughly 514 kilowatts). An automatic gearbox will deliver power to all the four wheels of the sedan.

Some rumors also suggest that Mercedes could offer an unexpectedly hotter variant that could give output of up to 8 horsepower (588 kW). Such rumors have been swirling over the Internet since September 2020, and most of the market experts believe that it is not impossible. The Mercedes-AMG GT 63 S E-Performance is already producing 831 hp (620 kW) and 1,033 pound-feet (1,400 Newton-meters) of torque.

Spy shots of the so-called S63 plug-in hybrid model have also revealed the interior. The images suggest that the brand hasn’t made extraordinary changes to the interior of the vehicle. In other words, the interior of the new model will be quite similar to that of the standard S-Class. However, there is a big possibility that the manufacturer could make a few styling tweaks.

While the luxury automaker has thus far remained tightlipped on releasing date and other details for the S63 plug-in hybrid model, it is widely expected to make debut sometime near the end of 2022.