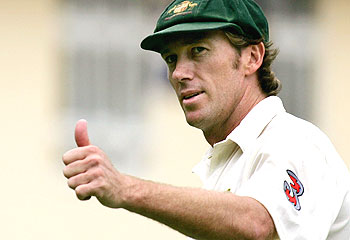 McGrath insisted that new fast-bowling spearhead Mitchell Johnson must lead from the front with fire and brimstone.

"To be a fast bowler you have to have that aggression. It''s a naturally aggressive part of the game and if you are running in and bowling and smiling at batsmen when they hit you for fours, you''re not going to stay there for long. I was a shy country kid who showed a little bit of aggression now and then," news. com. au quoted McGrath, as saying.

McGrath made a decision on the 1995 West Indian tour to lift a gear and intimidate the West Indies with short-pitched bowling, particularly at their tail.

Fast bowlers Courtney Walsh and Curtly Ambrose were initially stunned because no bowler had ever treated them with such disrespect.

McGrath, whose aura was enhanced by fiery newspaper columns and the fact that he often kept his distance from rival players, became Australia''s ultimate standover man and finished his Test career with 563 wickets.

As he neared his swansong, McGrath took Johnson under his wing, and yesterday advised his young protégé to accept the responsibility of being Australia's No. 1 bowler.

Johnson, 27, is a baby at international level with only 17 Tests under his belt, but now finds himself leading a vastly inexperienced attack without his injured mate Brett Lee.

"Mitchell should lead from the front to set the tone," McGrath said. (ANI)