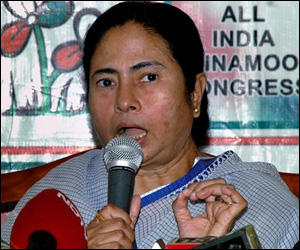 Kolkata, March 1 : West Bengal Chief Minister Mamata Banerjee Saturday inaugurated a slew of projects, asserting that her government will continue ushering in the development of the state.

"The centre has stopped releasing funds due for the rural employment guarantee scheme. Not only that it takes almost all our revenue towards debt servicing, despite all these we have been and will continue to usher in development," Banerjee said.

With the Election Commission expected to announce the Lok Sabha election dates shortly, bringing into effect the model code of conduct, Banerjee inaugurated various development projects and laid the foundation stone for many others from the state secretariat here.

"Once the model code comes into effect, we cannot announce new projects but that doesn't mean development work will stop. We may get busy in elections but development is a dynamic process so the government will continue doing its work," she said.

She also refuted criticism that her government indulged only in announcing projects and not in implementing them.

"For us, our commitment is our commitment... Unlike others, we do not announce projects before elections and fail to complete it later," she said.

"Most of our projects have become models for the nation to follow and I am sure that all our other projects will also become trend setters.

"Bengal traditionally has been the leader and through our developmental and welfare process we will ensure that it continues to show the path to the rest of the country," Banerjee said.

Accusing the erstwhile Left Front government of neglecting development of the state, Banerjee enumerated various developmental and social security schemes and programmes her government has initiated.(IANS)