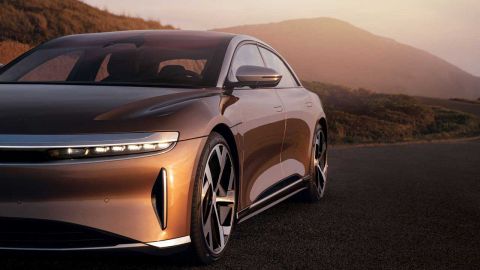 California-based electric vehicles company Lucid Motors Incorporated has announced a new edition of Air Dream sedan, and opened reservations for the entire model lineup. The entry price of $77,400 for the new edition of the Air Dream electric sedan is nearly half the 139,000 USD 1,080-horsepower Air Dream Edition, which is scheduled to be delivered first, sometime next spring. The new edition of the electric sedan also costs far less than the 800-horsepower Grand Touring edition, which has been priced at $139,000 with a schedule to be rolled out in summer 2021.

Though both of the aforementioned electric models equipped with 130 kilowatt-hour (KWH)-battery pack will deliver roughly 517 miles of EPA range, but if 406 miles and 480 horsepower through the rear wheels are sufficient, the newly announced, fresh-looking base model of Air Dream could prove to an efficient alternative to the widely-acclaimed Tesla Model S. However, any one opting for the new base edition of Air Dream will have to wait a little longer as it will not hit the market before spring next year.

After the recent announcement of the reduced prices of the Tesla Model S to $73,190, considering Lucid Motors’ new Air Dream edition will not be easy. But the new version of the electric car will definitely give a tough competition to Model S, which is rated at 402 miles of range. Moreover, Lucid motors’ new electric car version might be eligible for the complete $7,500 federal EV tax credit, which would make it effectively lower-priced than Tesla’s Model S. However, one must keep it in mind that one need to have at least that much tax liability so as to claim the full tax credit.

The base model of Air Dream will come with an optional dual-motor all-wheel-drive configuration. However, the $95,000-Touring model will feature the 406-mile range with the dual-motor layout for 620 horsepower, a glass cockpit display, an optional glass roof, along with additional preferences for materials and finishes.

However, those more affordable Lucid Air Dream editions will likely not be delivered until next fall. The Newark, California-based manufacturer has already started taking reservations for the new, affordable versions of the Air Dream. The reservation fee of $300 is fully refundable. It is also worth-mentioning here that all Lucid Air models are eligible for three years of unlimited access to Electrify America fast chargers.