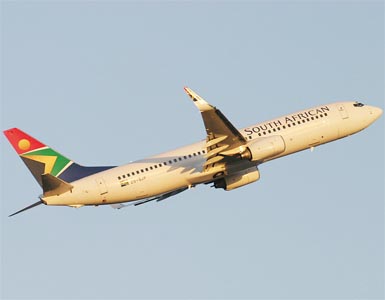 Rabat, Morocco  - West and central Africa have rapidly growing aviation markets, but the local airlines are having a hard time defending their turf against foreign competition.

"Especially in west and central Africa... (airlines) disappear, go bankrupt, leave huge debts. New investors try to relaunch them, hire a few planes, and close shop at their turn after a few years," he explained.

West and central African air transport will increase about 10 per cent annually until 2015, the aircraft maker Boeing predicts.

A shortage of road or rail links enhances the need for flying on the continent, which is also expected to increasingly act as a hub towards other destinations in Asia and the Americas.

"In Africa, there is still a lot of opportunity for business," Elijah Chingosho of the African Airlines Association (Afraa) told East African Business Week.

West and central African airlines, however, are facing formidable competition from other African carriers, such as Kenya Airways and Ethiopian Airlines in the east, and the
75-year-old South African Airways, one of the oldest in the world.

Morocco's Royal Air Maroc (RAM) has been extending its presence on the continent, as have other Arab airlines from north Africa, and from Gulf countries such as Qatar and the United Arab Emirates.

Major European operators include Air France-KLM, British Airways and Lufthansa, while the US carrier Delta has announced a new route from Atlanta via Dakar to Nairobi.

Air Burkina, which was bought by a consortium belonging to the Aga Khan Development Network in 2001, and the new Air Ivoire have run millions of euros in debt.

Africa has some 60 "small-size" airlines with a fleet of about 300 ageing aircraft, according to statistics given by RAM.

Africa accounted for about 4 percent of global air passengers in 2008, but the hull loss rate measuring the frequency of accidents stood at 2.12, compared to a global rate of 0.81, according to the International Air Transport Association (IATA).

West and central African airlines lack the competitiveness and know-how of their big international competitors, making them unable to operate on any but regional routes, Courbin said, also slamming the airlines for lax management.

Cities like Abidjan, Dakar, Libreville and Yaounde also do not have a sufficient economic stature to become major international hubs, according to analysts.

Some national airlines seek to gain muscle by cooperating with bigger ones such as RAM, which launched Air Senegal International (ASI) with Senegal, but which now wants to pull out of the venture over financial and other problems.

Air Burkina is trying to improve its finances by cooperating with other African airlines linked to the Aga Khan network's Celestair group - Air Uganda and Mali's CAM - and by focusing on central African routes.

African decision-makers know that resources need to be pooled to create solid regional airlines, yet ventures such as Air Cemac - an attempt by the central African economic community to create a new carrier - have had trouble taking off the ground. (dpa)