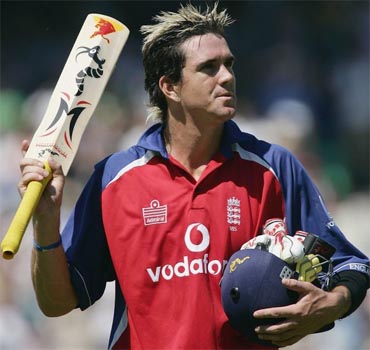 Guyana (West Indies), Mar. 20 : Former England cricket captain Kevin Pietersen is insisting that he does not want to lead the side in this summer's Twenty20 World Cup.

In an interview with his Nasser Hussain on Sky Sports to be aired today, Pietersen emphatically said `No' when asked whether he could be persuaded to lead England in the World Twenty20.

He added: "I'd have to think long and hard about being captain again because of my personality, because of the way I like to do things. We'll have to wait and see. If it gets chucked at me, I'll have to do a lot more thinking than the first time I took over."

"Straussy's been great. He's batted fantastically well. There was never going to be a problem with him. He's done a fantastic job, led from the front, scored some great hundreds and he's a nice guy. I knew deep down the truth about what happened over the captaincy. I had issues with other departments of the management but I didn't have any issues with players when I came back into the side," he said.

Skipper Strauss reckons the previous two one-day captains are the key men as England attempt to place a `W' in the result column after 14 failures abroad.

Their importance is magnified because Andrew Flintoff is still missing with a hip problem. (ANI)