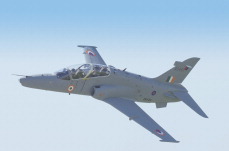 The Hawk-132 advanced jet trainers (AJTs) will be inducted into the Indian Air Force on February 23 in the presence of Defence Minister A. K. Antony.

The induction of the five advanced jet trainers marks the operationalisation of the aircraft. It will be an important milestone in the training of future fighter pilots. Training for young pilots will start from July 2008, said an IAF source.

The AJTs will replace the more demanding MiG-21 for providing advanced training to the next generation of fighter pilots. The first two Hawk aircraft arrived at Bidar on November 12, 2007.

The induction of Hawk AJTs will fulfil a long-standing demand of the IAF that will effectively bridge the gap between the slow jet trainer such as Kiran and the advanced fighter aircrafts in the Air Force.

The IAF first felt the need for an AJT in 1982. To fill the quantum difference in the skill and judgement levels required by a young fighter pilot as he transits to state of the art fighters such as the Su-30 MKI, Mirage 2000 and MiG-29, the Hawk-132 would adequately serve as lead trainer for these advanced aircraft.

The Hawk-132 is a variant of the highly successful BAE Systems Hawk AJTs. It incorporates an open architecture mission computer, glass cockpit and a state of the art avionics suite including a new generation Inertial Navigation System with GPS (INGPS).

Hawk-132 is also equipped with several Indian components such as the communication sets, identification Friend or Foe (IFF) system and the radio altimeter.

In addition to being an AJT, the Hawk-132 is fully combat capable and can carry air-to-air missile and air-to-ground strikes. It can also be used as a lightweight fighter.

The contract for the supply of the Hawk AJT was signed between the IAF and BAE Systems in 2004. The deal envisaged a supply of 66 aircraft.

The first batch of 24 aircraft will be built at the BAE Systems' facilities in Brough in East Yorkshire (UK), with flight-testing taking place at Warton. The remaining 42 aircraft will be manufactured under licence in India through a partnership with the public sector Hindustan Aeronautics Limited in Bangalore.

The Bidar airfield, which is located in northwest Karnataka, will serve as the main operating base for the Hawk. This base has been a training establishment for trainee IAF pilots since 1963.

India would be the third biggest customer for Hawks, closely following in the footsteps of the British Royal Air Force and the South African Air Force.

The Hawk is in worldwide operation with 800 plus aircraft in use by 17 customers and 22 armed forces. The trainers have generated over 1.5 million flight hours in experience. (ANI)