HIV/AIDS Cases on Surge in China 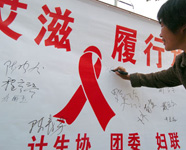 Zhengzhou: The number of HIV/AIDS cases has been surging fast in China. 18,543 new cases of HIV carriers and 4,314 cases of AIDS have been reported in China in the first six months of this year.

Han Mengjie, assistant to the director of the office with AIDS Control Work Committee of the State Council, said “2,039 people died of AIDS in first half of the year.”

“The total number of AIDS and HIV patients in China is 214,300, out of which 56,758 patients are of AIDS and 18,246 died of the disease,” said Han at a recent symposium sponsored by the United Nations Children’s Fund (UNICEF).

Han has warned that virus is spreading from high-risk groups to general public, because of the drug abuse, unsafe sex, and migration of the people already infected with disease.