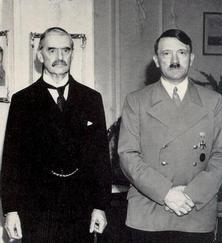 London, Oct 5 : Keen to ensure British Prime Minister Neville Chamberlain was fully aware of the threat posed by Adolf Hitler in 1938, Britain's intelligence agencies told him that the German leader Adolf Hitler called him an "arsehole", says a new book.

Britain's domestic security service MI5 was desperate to draw the attention of Chamberlain to its 1938 assessment that Hitler was in the early stages of a massive programme of territorial expansion.

In order to ensure that Chamberlain did not ignore the report, the MI5 included samples of Hitler's insulting references to Chamberlain, says the book, 'The Defence of the Realm: The Authorized History of the MI5' by historian Christopher Andrew.

The report made a "considerable impression" on Chamberlain, who was known to be infuriated by mockery and disrespect.

Chamberlain, who carried out a policy of 'appeasement' toward the Nazis, was also mocked by Hitler for his trademark umbrella as a symbol of his feebleness, says the book.

Author Christopher Andrew, professor of history at Cambridge University and a world expert in the history of intelligence agencies, said the discovery of MI5 report was the most sensational of his findings from among the nearly 400,000 secret MI5 files he was given access to.