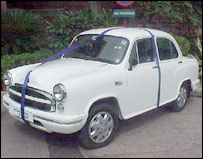 State Transport minister Mr. Subhas Chakraborty during inaugural ceremony said, “The AC taxi service is a step forward in our efforts to meet the demand for quality public service. ”

The state Transport department has issued 300 permits to HM to roll out such Ambassador AC taxis, which will operate from the airport and Howrah, Sealdah and Kolkata railway stations.

He further added, “We will introduce separate pre-paid AC taxi counters at the airport and the three railway stations. If necessary, counters will also be set up at Salt Lake, Esplanade and Maidan areas. ”

An official release said, “The taxis are BS III compliant and come with body color FRP bumpers, replacing nickel chrome ones. It also has features like split seats with headrest, front and rear seat belts and mobile charge stations. ”

These taxis have a red stripe running on its body with “AC Taxi” painted on the front doors. In case of using the AC, the fare would be a nominal 25% more than the non-AC meter fare, it added.